This past June 25, U.S. Senator Bob Casey, Jr., and Dr. Val Arkoosh, Chair of the Montgomery County Board of Commissioners, along with Renee Gorski, Patrick Druhan, and PCRC’s Executive Director Barbara Wilhelmy and staff member Danielle Gadsden, participated in a SNAP benefits Roundtable panel discussion held at PCRC. This was just ahead of the 2018 Farm Bill vote in the Senate, coming a week after the House passed its partisan measure. 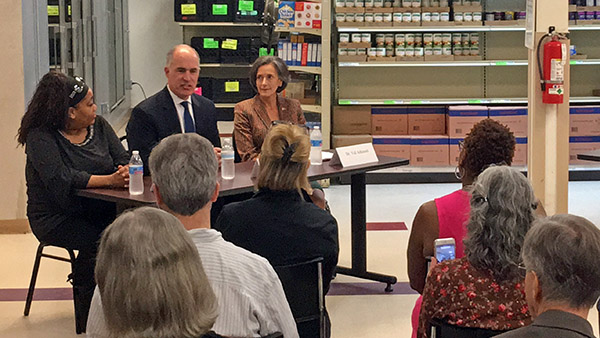 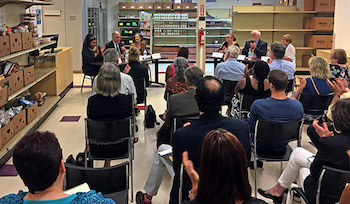 Montgomery County Commissioners’ Chairwoman Val Arkoosh said about 10 percent of Montgomery County’s population — about 80,000 people — suffer from “food insecurity,” meaning they do not know where their next meal is coming from and 51,000 of them are children.

Many of them “make too much money to qualify for SNAP,” but even those who do receive an average of only $123.51 per month from the program, which covers, at best, two weeks of food bills.

“As a result, parents often sacrifice their own health and nutrition to feed their children,” said Arkoosh, who is also a medical doctor. “Cutting funding in the SNAP program will be devastating to these Montco families.”

A bill now coming out of committee in the Senate “with strong bipartisan support,” would restore the SNAP program to its current level, and even add a little more money to encourage the purchase of fresh fruits and vegetables, Casey said Monday.

Calling the cuts in the House bill “draconian,” Casey said “this is wrong. This is a program that works. If you want to talk about return on investment, for every dollar you spend on SNAP, the economy gets $1.80 in return.”

“But beyond that,” said Casey, “there is the moral gravity of this issue.”

Read The Mercury’s coverage of the event here. Watch the CBS3 Philly feature below.

To share your thoughts in the Comments section – scroll down

This site uses Akismet to reduce spam. Learn how your comment data is processed.

Sign up to receive future issues of Cluster Chronicles